This article was first published in the International HR Adviser Autumn 2020 Issue.

For many years, the Global Mobility profession have relied on the so called “183 day rule”. This so called rule assumes that there are no tax issues for an employee working on a short-term basis in a country other than their home country as long as the employee is not present in a host country for more than 183 days and that they are paid by their home location. However, the “183-day rule” is not actually a rule but rather an exception to the rule that tax is paid in the location an individual’s employment is exercised.

a. The employee is present in the other State for a period or periods not exceeding in the aggregate the 183 days in the relevant treaty period (e.g. calendar year, fiscal year, any twelve-month period), and

b. The remuneration is paid by, or on behalf of, an employer who is not a resident of the other State, and

c.  The remuneration is not borne by a permanent establishment which the employer has in the other State.

It is from this that the so called “183-day rule” has stemmed. However, in recent years, in determining whether this  exemption will apply, more and more emphasis has been placed on determining whether conditions (b) and (c) have been fulfilled and questioning who should be considered the “employer” under the provisions of such double tax treaties. Is it the entity with which the employee has his/her legal employment contract, or should other aspects be considered as well?

In 2010, the OECD revised its commentary relating to Article 15 and introduced the concept of the economic employer. The commentary plays an important role in this context, as it indicates that the “employer” of a globally mobile employee may not necessarily be the legal employer. In determining who the employer is, other factors such as the following should be considered:(2)

Based on this approach, substance should prevail over form. This means that the term “employer” should be considered in a broader sense and the whole context of the employment should be reviewed to determine which entity is the economic employer of the employee under the provisions of the treaty in order to be able to decide whether exemption under article 15 can be granted to avoid host country taxation. Many countries such as Germany, Luxembourg and Sweden are increasingly considering not just the duration of the Assignees stay but also the nature of the work performed, who controls that work and who benefits from it.

The table below provides an overview of the top 15 countries for business travel spending in 2017, as outlined by the Global Business Travel Association (GBTA), and whether they adopt the economic employer approach(3). 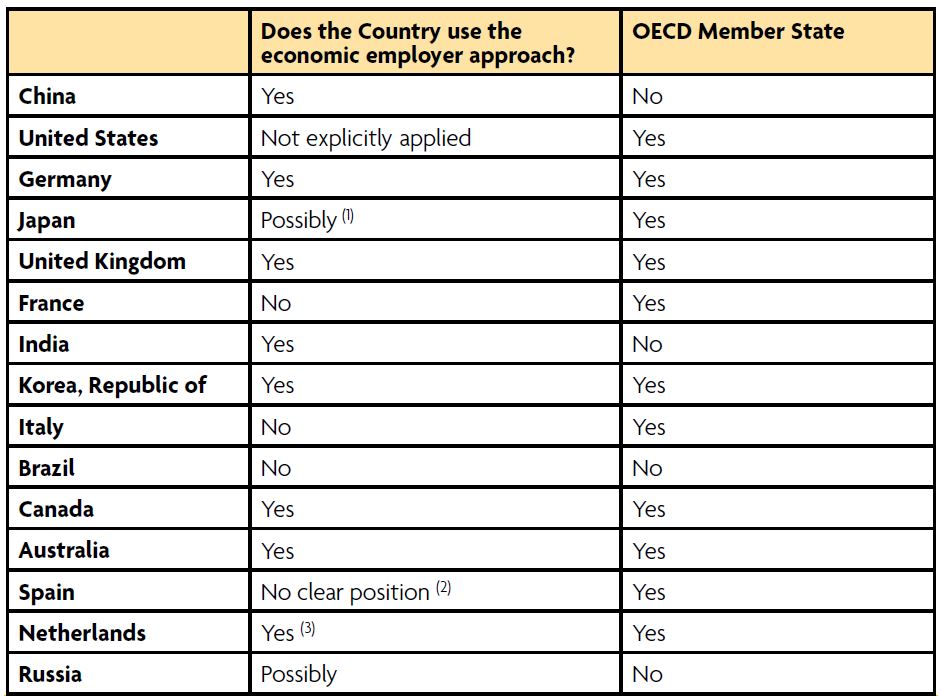 1. Japan does not currently adopt the economic employer approach. However, employment income is considered Japanese sourced when remuneration is earned for services rendered in Japan, regardless of where or when the remuneration is paid. On this basis, the Japanese authorities would consider the facts and circumstances of particular cases.(4)
2. The Spanish Tax Authorities have not established a clearly defined position in relation to the economic employer approach.(5)
3. The Dutch Supreme Court has adopted an economic employer approach for the interpretation of the term “employer”. The Supreme Court has ruled that the host entity is considered as the employer for treaty purposes if the following conditions are met:

It is clear from this summary table that when assigning employees abroad on short-term assignments, employers need to be mindful of the host country’s interpretation of the definition of employer for the purpose of determining whether an exemption from  taxes will apply on employment income under the terms of the Double Tax Treaty. We discuss in more detail below the adoption of the economic employer approach by the following countries:

The Economic Employer Approach In Germany

Germany fully supports the economic employer taxation concept. (7) In considering who is a seconded employee’s employer for the purpose of taxing rights, the German tax authorities do not rely solely on the civil law aspects of who is the employer, but also place weight on the economic considerations. A German company will be considered a seconded employee’s economic employer where the German company financially bears the wages for the work performed. Therefore, salaries that are paid by a foreign employer (who does not have a permanent establishment in Germany) but are recharged to the German company, would be subject to withholding tax in Germany. The same applies as of 2020, for salary that is not actually recharged but should have been recharged under an arm’s-length perspective. The German company is deemed to be the economic employer and thus required to calculate and transfer the appropriate wage tax return to the tax office on day 1.(8) Many jurisdictions have taken a similar approach with looking at cross charging of costs as the deciding factor. Such an approach places emphasis on the need for global companies to be aware of where their employees are, what they are doing and for how long. Companies need to be tracking these employees and counting their days present in these jurisdictions.

The Economic Employer Approach In Sweden

Sweden’s government have presented a proposal to introduce the economic employer concept into law effective 1st January, 2021. If Sweden implements the current draft proposal into law on 1st January, 2021, factors beyond who pays the employee’s salary would have to be considered in assessing who is the employer and identifying if the employee is liable to tax in Sweden when working there on a temporary basis. Under the current proposals, the government provides an exemption for employees working within a corporate group, if the employee works for a maximum of 15 days in a row or 45 days in total during a calendar year. (9)

The Economic Employer Approach In The United States

The United States have not explicitly adopted the economic employer concept, but a non-resident alien will not be subject to tax on income received for personal services performed in the United States where the following three conditions are met:(10)

a. The employee performs services of or under a contract with a non-resident alien individual, foreign partnership, or foreign corporation, not engaged in a trade or business in the United States; or the employee works for an office or place of business maintained in a foreign country or possession of the United States by a US corporation, a US partnership, or a US citizen or resident.

b. The employee performs these services while they are a non-resident alien temporarily present in the United States for a period or periods of not more than a total of 90 days during the tax year.

c. The pay for these services is not more than $3,000.Where these conditions cannot be met, most Double Tax Treaties with the United States will provide an exemption from US tax on employment income earned by nonresident aliens provided the following 3 conditions can be met:

If a foreign person pays the salary of an employee who is employed in the United States, but a US corporation or permanent establishment reimburses the pay or with a payment that can be identified as a reimbursement, neither condition (2) nor (3), as the case may be, will be considered to have been fulfilled and the US will deny this treaty exemption.(11).

It is essential to consider that the OECD issues guidelines, not legislation. OECD member countries are not required to follow its advice in drafting and interpreting treaties or local tax legislation. But it is certainly true that the definition of the economic employer is gradually being accepted by many countries, with some implementing it more vigorously than others. Challenges for international business travellers are increasing, and countries with new policies and guidance are upending the traditional 183-day principle. What is glaringly obvious from the above short analysis, is that companies with a mobile workforce need to be tracking and monitoring these employees.

Employers will need to know on a real time basis where their employees are and what are the risks associated with it. Adequate records will need to be kept on all employees in relation to any tax positions taken. More recent developments in the areas of Remote Working will only exacerbate these issues. If your employees have been working remotely during the Covid-19 pandemic, they may already have triggered economic employer liabilities – remember they are ‘working’ not ‘visiting’. Problems that were traditionally part of business traveller management could now be part of remote worker policy. While many tax authorities have issued holding notices about being flexible on overstays or displacement during Covid-19 Spain has recently broken with this policy and has announced that they will not make exceptions for days of presence due to Covid-19.

Companies that have a distributed workforce should now carry out a ‘Look Back’ audit of their displaced workforce to gather data around potential thresholds that have been or may be about to be breached. To discuss how we could help you with such a ‘look back audit’ contact us or any of our partner company services, BDO Quicktrip, Weichert Global Organizer, Santa Fe Business Travel Tool, Altair Orbit, Blick Rothenberg International Trips App, Baker Tilly Travel Mapp, GTN Whereabouts, Aires TravelTrax, AAB, tpa and more to come. We have a robust technological solution that can be deployed in days and results achieved in hours.

Head of GT Global Tracker’s Research department. Jeanette has been working in the Tax and Immigration field for 20 years. Her experience crosses multiple jurisdictions and includes immigration and tax application processing and the provision of technical and compliance advise to large multinational corporations to small indigenous companies and private individuals. Before joining GT Global Tracker, Jeanette worked for a ‘Big Four’ tax firm for 9 years and spent 5.5 years working in two global immigration firms in London. Her time was spent providing Immigration advice to large multinational companies and leading a team of Immigration advisors dedicated to these accounts. Jeanette is an AITI Chartered Tax Adviser.

Siobhan McDonnell is our Tax and Social Security Research Manager. Siobhan trained and worked in one of the Big4 accountancy firms for a number of years, advising large multinational clients as well as small indigenous companies on tax technical and compliance matters. Siobhan has also spent several years working for a large Fortune 500 multinational company in their International Tax department while she lived in the United States. Siobhan is a Fellow of the Institute of Chartered Accountants in Ireland and an AITI Chartered Tax Advisor.

(1) The OECD Model Tax Convention serves as a guideline for establishing tax agreement between members of the OECD.

Tracker Software Technologies uses cookies and similar technologies on our websites, and by using the site you are consenting to them. You can manage your cookie settings via your browser setting at any time. To learn more about how we use cookies, please see our Cookie Policy.